Our main character, Mike, is flustered and aggravated, while walking down a typical NYC street on a fall afternoon. He is on his way to a bar to drink his sorrows away with his best friend, GARY. You can tell from his expression and body language that Mike is not having the best day. A car almost hits him and makes a loud HOOOOOONNNNNKKK.

Jesus Christ the bad drivers you’ll find in this city.

When about to get back on the sidewalk, a bird comes and poops only inches away from his shoes, causing him to stop mid tracks and drop his cell phone in the sewer.

Audience sees MIKE walk into the bar. Bluesy, depressing music is playing in the background. MIKE visibly looks around for his friend GARY, who was supposed to be bartending that night. MIKE doesn’t see him, but doesn’t think much of it and sits down at one of the tables. SALLY, the waitress then walks up to him after 30 seconds or so.

(realizes who it is)

You know, however people do, I suppose. Not havin’ the best day, that’s for sure.

So, you working right now?

Well no, right now I’m sitting here, talking to you.

So hey, where’s GARY? I heard he was supposed to be bartending tonight. I was gonna meet him.

SALLY’s face changes from friendly and casual, to concentrated, to horrified.

Oh… Gary… I guess you never…

Well the thing is… The thing of it is…

DOLLY ZOOM to Mike’s face to see an expression of shock and horror. Dramatic music plays in the background.

After a few seconds, it’ll cut back to a wide shot of the both of them with the normal bar music playing.

I know, Mikey. Neither can we here.In fact, they still got his body down at the hospital, since we only found it this morning. Diane was gonna go and visit it, one last time. You wanna come with?

Great, great. I’m sure it’d be better for the both of you to have somebody to go with.

DIANE, the bar’s other waitress, enters the room, in a nice attire. MIKE is too shocked to be paying full attention, so when DIANE subtly signals to SALLY, he doesn’t notice.

Hey Mike. So you heard the news then.

Yeah, I heard, just a minute ago. I just can’t believe it. He wasn’t even that heavy a drinker!

DIANA walks toward MIKE and gives him a warm hug. While giving the hug, DIANA signals SALLY to text her when she leaves. Something is clearly fishy.

There, there, It’s gonna be okay.

DIANE separates from the hug.

Look, honey, I was just gonna go visit Gary to say goodbye. I’m sure he would’ve loved it if you came too.

Yeah sure, I’ll go. Sally was just telling me about it.

(looking at her watch)

Oh and would you look at that, visiting hours at the hospital are almost ending.

Yeah, well they have that thing on Thursdays, ya know, that makes them close early.

Huh? Never heard of this thing.

Yeah, ain’t that a thing? We should go. Now. The sooner the better.

Diane is hurriedly escorting a flustered Mike, out of the bar.

You think it’s for the best?

Yeah, yeah, it’s for the best.

Well, whatever you think is best then.

Once they’re finally out of the bar, SALLY lets go of the front she put up in front of Mike. The song “Oh Yeah” from Ferris Bueller’s Day Off plays in the background.

All right, come on out now.

GARY walks out, from upstairs, his identity unknown to the audience.

Come on, come on we gotta go!

It’s happening right as we speak. Time is of the essence.

Here, throw me those.

SALLY is driving herself and GARY to an unknown location. They are in a hustle to get there on time, and are a bit lost.

You owe me so much for this.

Yeah, well don’t rub that in my face now. We’re almost there.

I’m not seeing this place. Shouldn’t it be on the right?

Are you sure right? I thought I heard left.

Well if anyone should know it should be you.

The number on the building is odd. Buildings on the left all have odd numbers.

Well ain’t that just something, Einstein?

I’m just saying, no need to get nega…

Just then, SALLY puts up her hand to stop them from talking. MIKE and DIANE were walking right alongside there car.

SALLY and GARY both slide down simultaneously in their car seats. When they pass by, DIANE notices them in the window and gives them a WTF expression.

MIKE and DIANE are walking on their way to the hospital. They see SALLY’s car move every time they move, and stop every time they stop. Then suddenly, the car bolts forward.

Mike takes no notice or care. He was talking to SALLY from before about old times with GARY, but since DIANE knows GARY’s not really dead she can’t really be bothered with MIKE’s grief. MIKE is oblivious to this.

You know, so then, I pick up the ruler, and Gary’s like “WHAT ARE YOU DOING, THAT’S THE RULER WITH THE CHICKEN FEATHERS” and of course I respond like “Oh My God!”…

Oh wow, really, that’s like such a sweet story. That story’s gonna be like, a total hit at Gary’s funeral.

Awww. You know, you’ve been a great help to me, on the way to the hospital. We should go to the funeral together, to support each other in this time of need!

(lying through her teeth)

Really? You took the words right from my mouth! Anyways, here we are!

Huh? The hospital is right over there.

MIKE points to a giant hospital a block in a half away.

This… this is just a secret entrance to the hospital. An underground entrance.

And what’s with this car that’s parked right on the sidewalk?

CUTS to SALLY’s car, which was evidently abandoned right outside the “hospital”, waiting to be taken off by a tow truck.

I don’t know, but that’s a great question to ask the manager. Come on, let’s go in here.

An urgent DIANE and bemused MIKE walk towards the entrance of this place.

Although DIANE said it was a hospital, it’s clear at this point that it’s only a front for something else.

The front door opens up into a lobby, in which the two characters walked through. MIKE looks around in bewilderment, thinking “where the hell is this person taking me?”.

With DIANE taking the lead, the two slowly walk towards a room off to the side. Anticipation is building up about what could be behind that door.

DIANE reaches it first, while MIKE is still trudging along, hesitantly.

Come on, I think it’s in here!

(getting teary eyed and emotional)

I dunno if I’m ready to see Gary’s body yet. Or whatever’s behind that door. It’s all happening so fast. I’m just not ready, I don’t think.

It’s going to be okay. We’ll do this together. Just take my hand…

DIANE and MIKE walk the remaining steps. MIKE is clearly almost about to lose it. DIANE opens the door, only to see a huge crowd of people in the room, all gathered for a surprise party!

SALLY and GARY are both in this crowd.

Wha…wha…what the hell is going on?

NOPE! Still very much alive. Did however drink an unhealthy amount of liquor last night. One of the perks of being a bartender, ya know. Free booze! So in that respect I wasn’t completely lying. But hey,

ya know what’s gonna cure my hangover right now? Getting more trashed with my best friend in the entire world!

MIKE’s facial expression when he first entered the room shifted from devastated, to dumbfounded.

However, now that he fully realized the whole thing was a setup for a surprise bash, it shifted again into a dead pan, passive aggressive expression.

The crowd starts singing the “happy birthday” song, except the word “birthday” is replaced by “friendiversary”, and at the end they said both GARY and MIKE’s name.

By the end of the song, people are popping champagne bottles and using party horns.

One person even forcefully puts a party hat on MIKE’s head, while RANDOM PARTY GUEST is putting his arm around him, acting like his buddy. All seem to be oblivious of MIKE’s discomfort to the situation.

So hey, Mikey, how you enjoying this party? Preetttty good, eh?

Yeah, this is great man. I really needed this, especially today.

Really? That’s awesome! To be honest, though, a few of the people here were worried the faking of Gary’s death would be a tad…over the line, per se?

How could anyone POSSIBLY think this is over the line?

I know! That’s exactly what I said! I said: I know this guy. This guy’s a champ; he can handle it.

What did you say your name was again?

I mean, it’s not like the clues weren’t there. You didn’t seriously think you were being brought to a hospital, when you walked into this building, did ya?

Only an IDIOT would believe that. But of course, you’re too smart to have fell it, aren’t ya. You probably knew ALL along, hehe.

Oh, yeah. Course I saw it coming. How STUPID would I have been otherwise? In fact, next phone call I get telling me about a dead friend or relative, I’m gonna hang up on them, CAUSE IT’LL ALL JUST BE A BIG FAT LIE!!!

MIKE storms off from the conversation. He spends the remainder of the party sitting at a couch looking bitter, drink in hand, trying to forget all that happened. Every 10 minutes or so he’ll have to passive aggressively fake his enthusiasm to some random party guest.

INT. PARTY – THE NEXT MORNING

MIKE wakes up in the same exact position he was on the couch, with an empty cup in hand. Everyone else is still passed out on the floor. MIKE is very tired, and a little hungover, but that didn’t stop him from needing to get the hell out of there. When walking out he made no effort to avoid stepping on people.

MIKE is walking up to a telephone pole, with flyers in one hand, and a hammer in the other. When he nails up a flyer, the camera cuts to a closeup of it.

Camera then cuts to a shot of a police car that was driving, but stops when they notice MIKE hammering up flyer.

HEY! You can’t do that here. That’s city property your vandalizing! HEY! Did you here me? Get back over here! That’ll cost you a fine!

MIKE swiftly walks away into the street, so as to cross it and avoid the cop car. The song “Oh Yeah”, from Ferris Bueller’s day off is playing again.

(in the background, sort of muffled)

I see what you’re doing sir, and it’s not going to work. That it’s, just a little this way.

Just as in the beginning, when MIKE is trying to cross the street, a car comes close to hitting him and makes a loud HOOOOOOOONNNNNNKKKK.

Over the credits, the song is still playing. 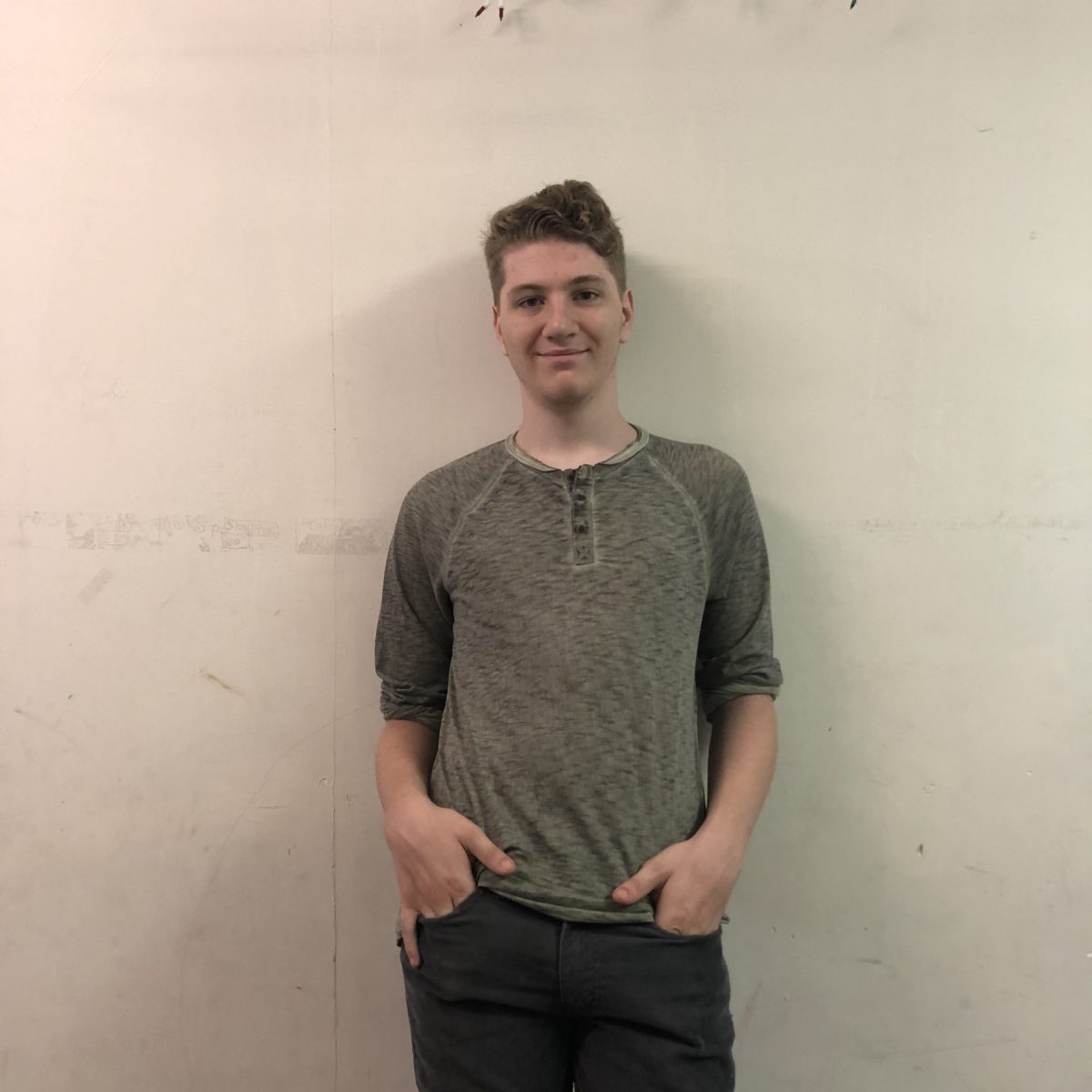 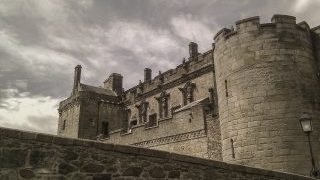 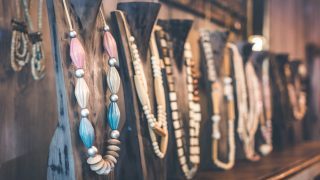 A Vampire Walks into a Jewelry Store 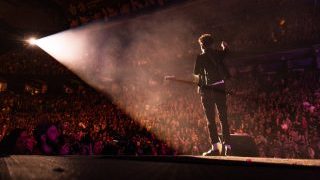